This year, our university celebrates its 30th birthday. We held a festival to celebrate this occasion, and during this event, UJEP’s Rector awarded the commemorative medals to those whose impact greatly helped our university to prosper and grow.

On 30th September, a total of 12 people connected with our university were awarded the commemorative medal of UJEP for their help in the development of our university in the past years. The medals were awarded by the UJEP’s Rector himself, doc. Martin Balej, during the celebration of our jubilee and 30 years of history.

“The last time the commemorative medals were awarded, was ten years ago, during the celebration of the 20th anniversary of our institution’s existence. In this long period, I would like to emphasize the uniqueness and the intent not to ever devalue these medals,” says Martin Balej.

Besides the medal itself, those awarded also received the vase from the collection NUEEVO designed by the LLEV studio (authors Marcel Mochal and Eva Mochalová). This collection received the prestigious prize EDIDA 2020 and the award in the Czech Grand Design Award competition. This valuable piece of art is connected to our institution by Marcel Mochal, who works as a vice-dean for development in the Faculty of Art and Design UJEP and is also the current head of the Department of Glass FAD.

“Those selected for this award were nominated by the individual faculties, which selected their current or former colleagues who have significantly contributed to the well-being and development of our university. The act of awarding these medals expresses the joy and pride which UJEP feels towards these unique employees working towards the benefit of the whole university,” emphasizes the Rector.

Among those awarded are also those who have positively influenced the scientific and research activities in faculties or are respected teachers or guarantors of study programmes. The commemorative medals will also be given to those who were there when the university was formed 30 years ago.

“I also gave one of the commemorative medals to the current minister of education, Robert Plaga, whose contribution to our university I consider to be crucial, not just in the area of building up our campus, but also due to his understanding and thoughtful approach towards regional universities,” explains the Rector. 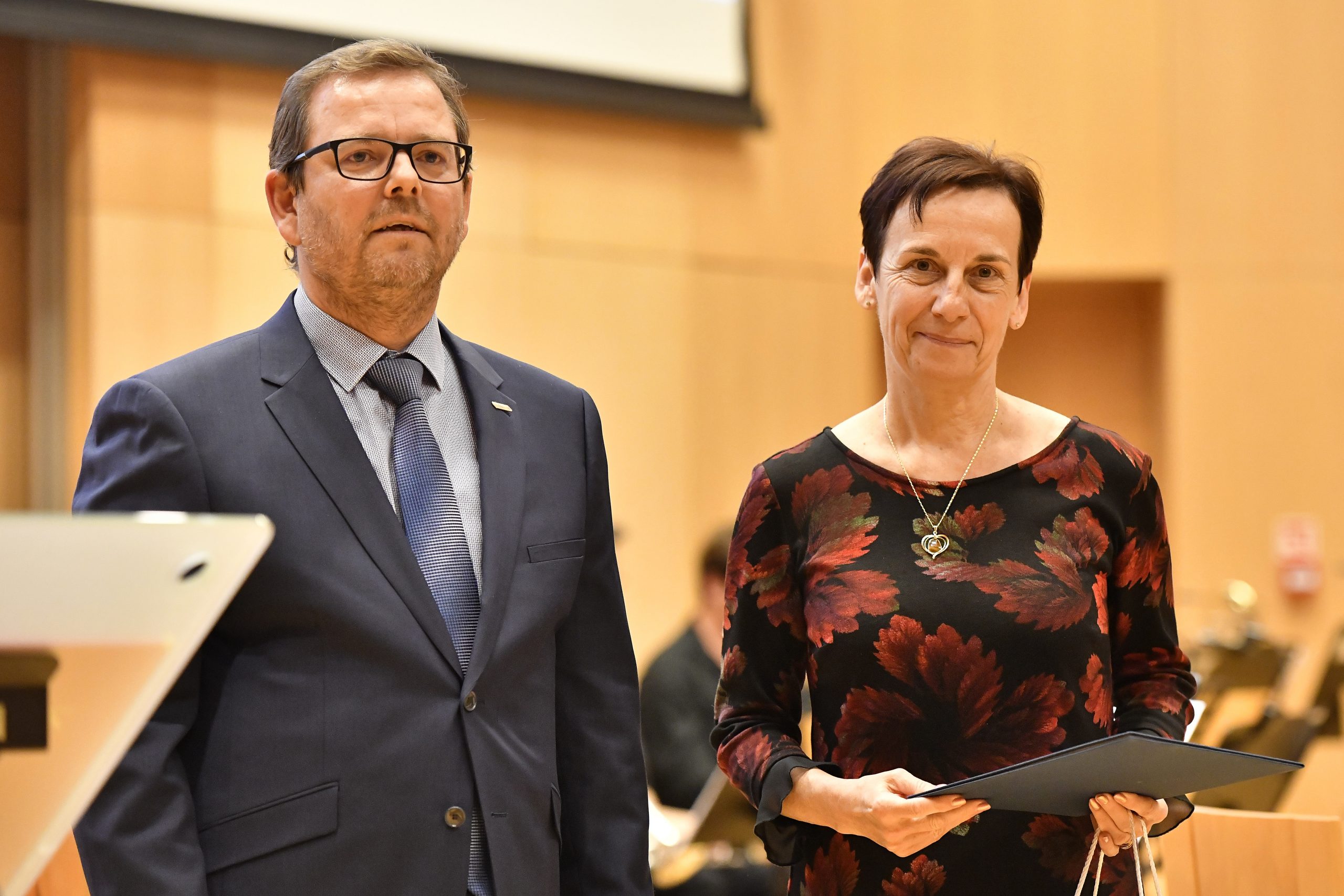 The current Minister of Education, Youth and Sports and an erudite expert on Czech education, including higher education, Ing. Robert Plaga, Ph.D., is known as a man of firm principles and clearly formulated opinions. He is very good at translating these into concrete instructions and measures, including extraordinary ones. In his many years in Czech higher education, he has had to deal with a key problem, which is to support the excellent but also to be empathetic to the needs of the weaker ones. He has helped the University of Ústí nad Labem in this sense many times by showing himself to be a person who not only listens, but above all listens. His merits for the development of the University of Ústí nad Labem also grow in connection with the building of the university campus, when he supported the university management in numerous difficult situations and helped UJEP. 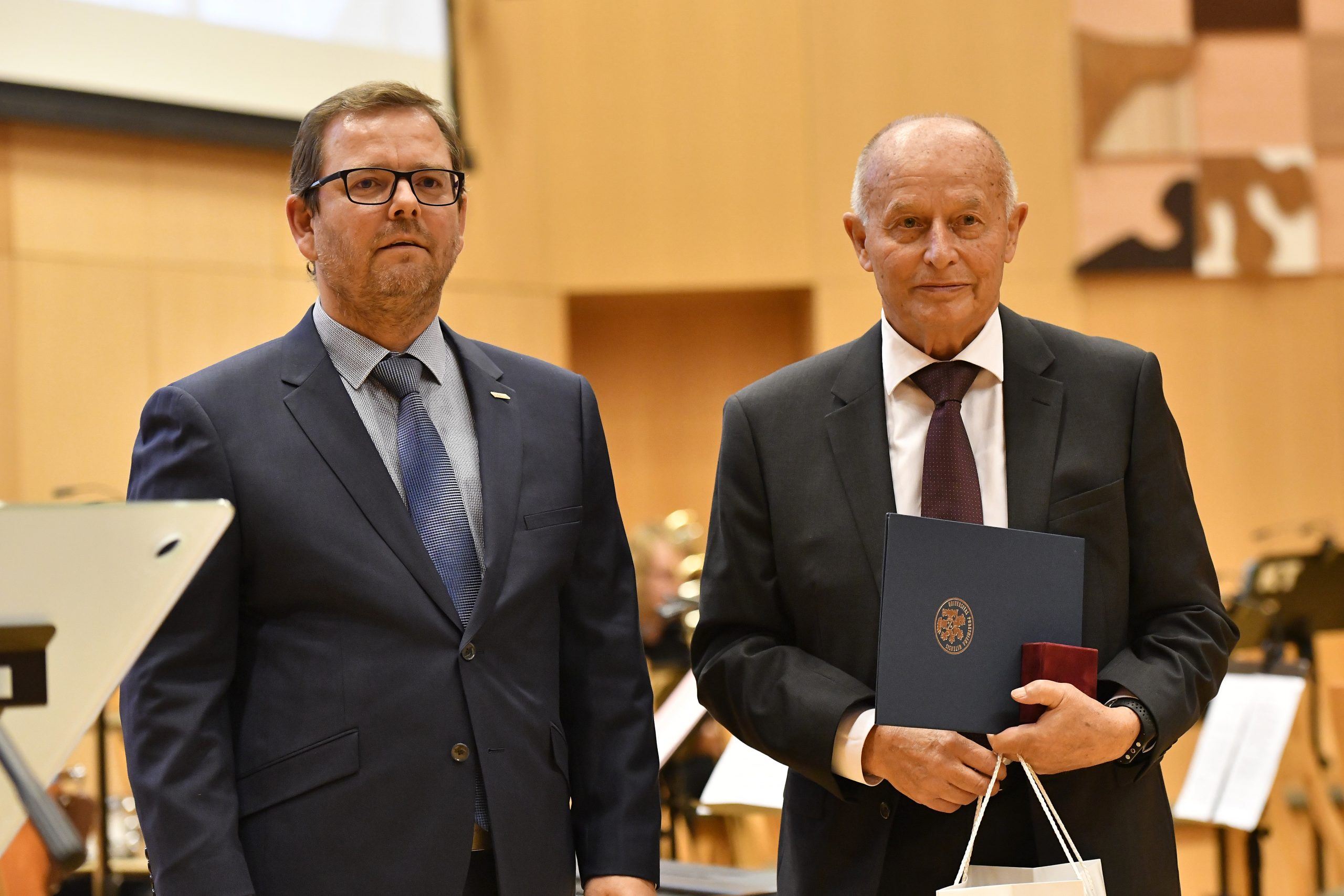 Since 2012, he has been associated with the Faculty of Health Studies, contributed to its establishment, and has been managing it as Dean since 2015 until today. In a relatively short period of time, he has managed to accredit 10 Bachelor’s and 2 Master’s degree programmes for the Faculty. He also significantly intensified and expanded the faculty’s cooperation with Regional Health, Inc., and during his leadership the faculty jointly established 9 more clinics to the current 12. Doc. Havel not only abounds in experience, but is especially known for his diligence, problem-solving ability, and undying enthusiasm for the university as a whole. 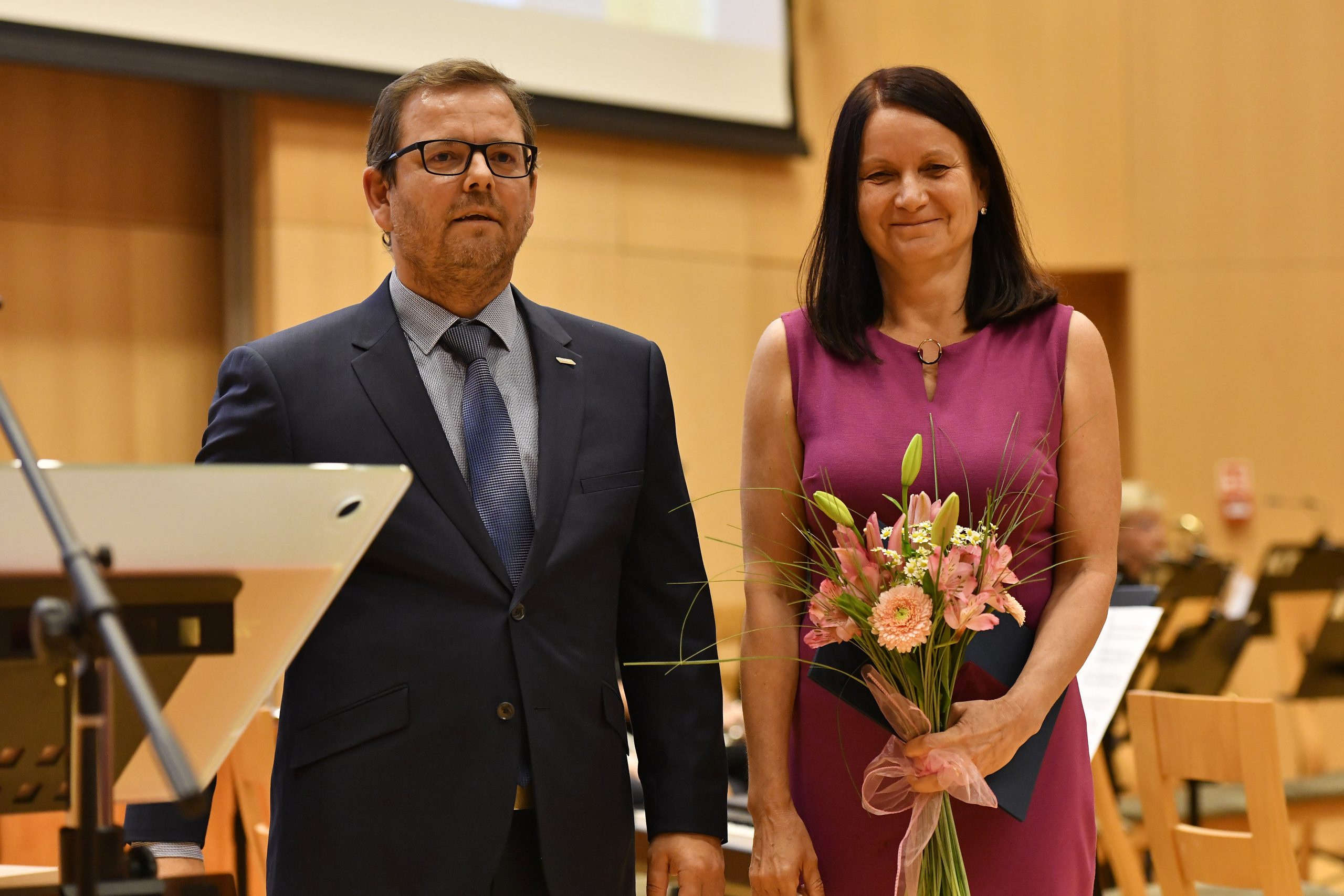 Alena Chvátalová has a decisive contribution not only to the successful institutional evaluation of UJEP in 2008 and 2010, but also to all the evaluation and self-assessment processes of the University in the following years. Her coordinating role in this respect is crucial, which resulted in the award of institutional accreditation for 10 years for 5 areas of education in 2019.

After 30 years of development in the field of studies, with the exception of the youngest faculty (FZS), all faculties have accreditation for all types of study programmes. The work of RNDr. Alena Chvátalová has a huge contribution to this result. Especially in the difficult covid times, when a number of even more rapidly changing measures had to be implemented in the field of education, the university had security in the post of Vice-Rector for Studies. 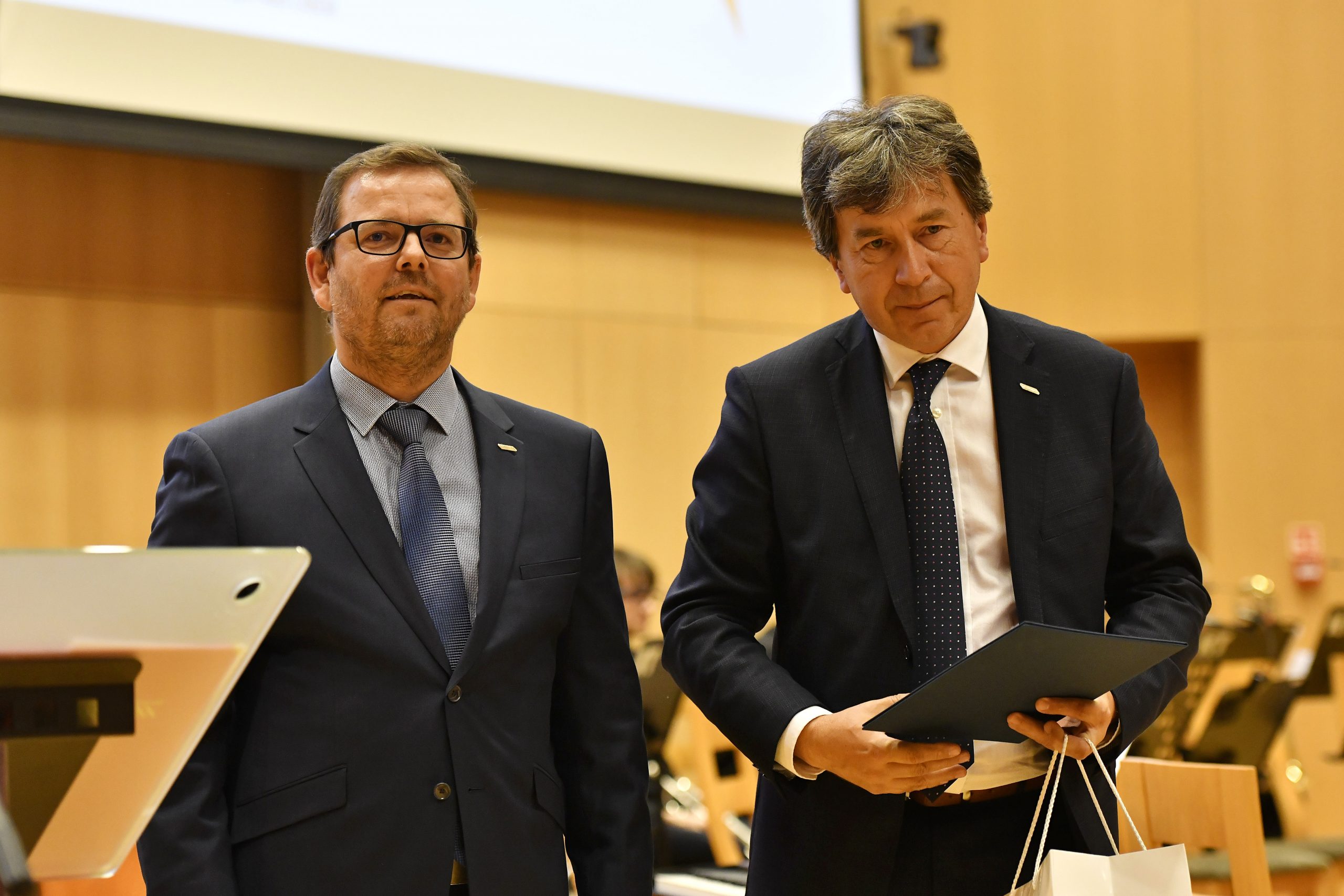 Ing. Leoš Nergl has been associated with UJEP for many years, now as bursar. He has always demonstrated through his actions as Chairman and Vice-Chairman of the UJEP SR that he is very close to the University and cares about its successful development. Moreover, he has demonstrated his managerial skills especially in recent years, when he has been responsible for the economy and management of UJEP and has been instrumental in many difficult decisions in the management of the university. He has been instrumental in the construction of the UJEP Campus over the last seven years. 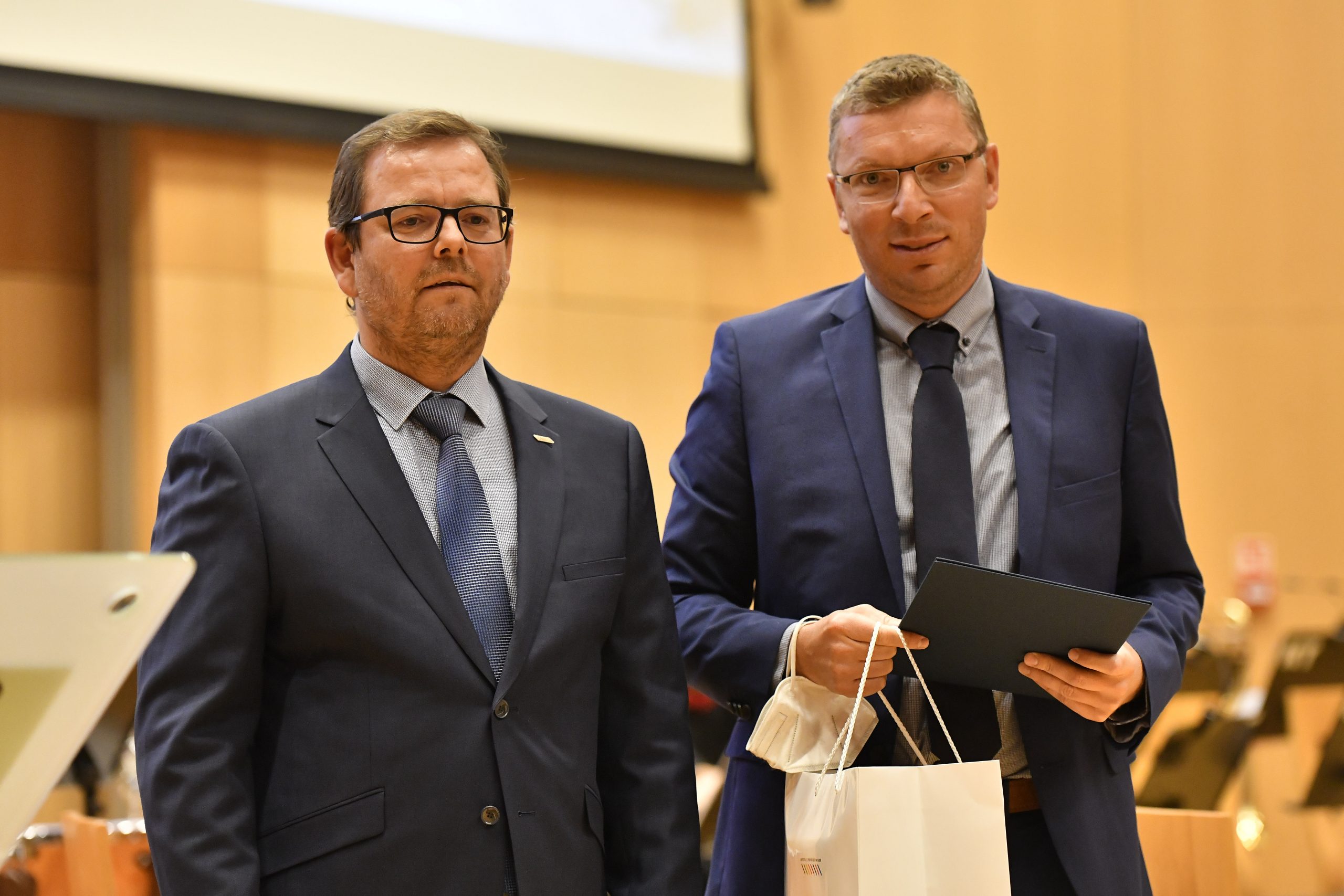 Under the leadership of doc. Koutský, the FSE not only defended the existence of existing study programmes, but also obtained accreditation of two new doctoral study programmes. His tireless efforts for the qualification growth of the staff have also increased the quality and quantity of scientific research outputs, and the faculty has become a successful applicant in national grant agencies. Doc. Koutský also significantly supported the involvement of the faculty in the Ústí nad Labem region. In 2014, under his leadership, FSE passed a gender audit and became the first faculty at a public university with an equal opportunities employer certificate. In 2016, the faculty won the Ústí nad Labem Region Award for Social Responsibility in the Public Sector category. 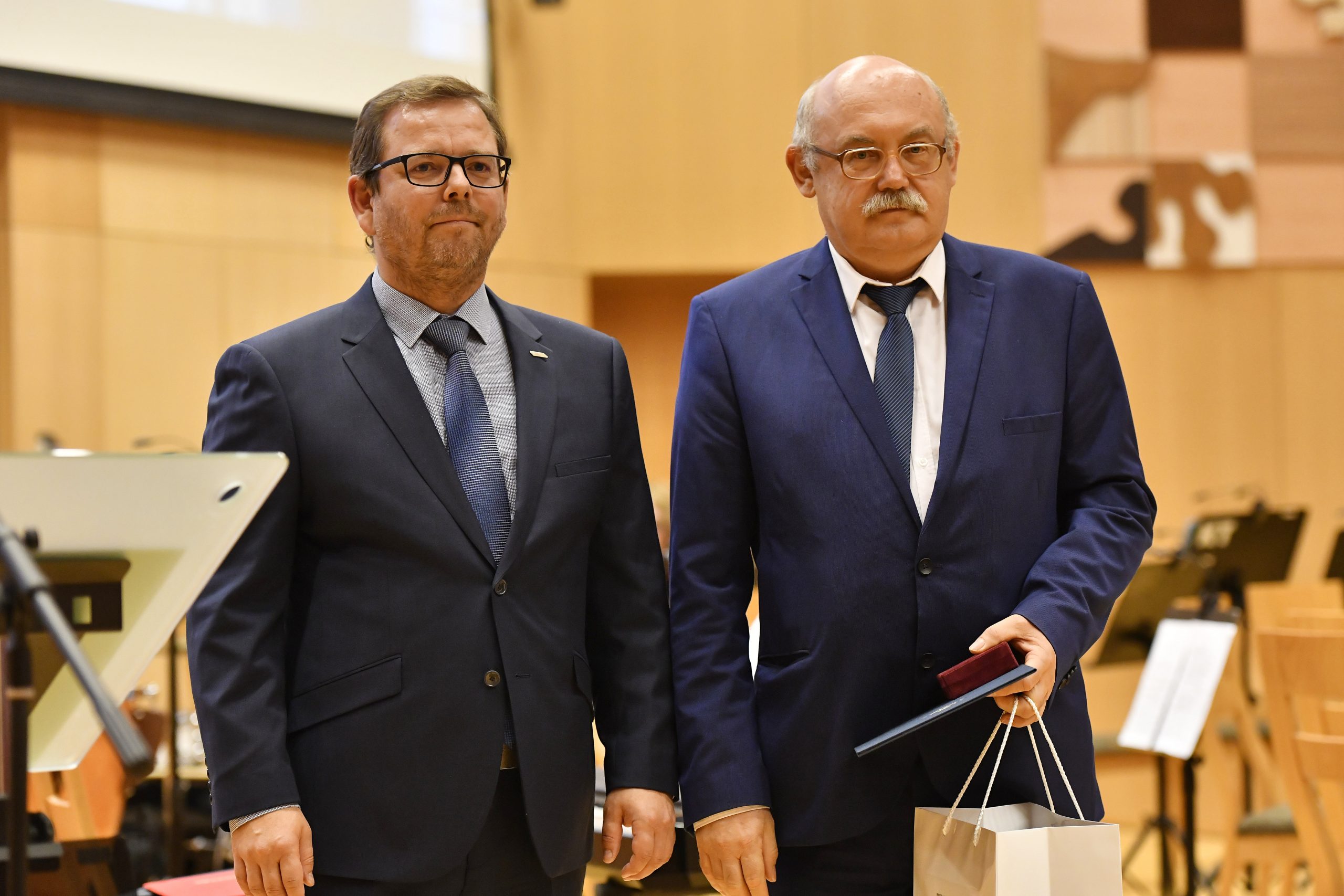 Prof. Štefan Michna has been the Dean of the Faculty of Mechanical Engineering at UJEP since 2015. Prior to that, he headed the Department of Technology and Materials Engineering for 8 years. During his tenure, the faculty managed to develop the Science and Technology Park Ústí nad Labem as a workplace of highly equipped laboratories for practice and teaching. His influence on linking the university’s cooperation with industrial enterprises in the region and beyond was and is quite crucial. In the field of education, under his leadership, the faculty has successfully defended or completely newly accredited ten programmes belonging to the field of Mechanical Engineering, Technology and Materials, from bachelor to doctoral level.

Prof. Michna was particularly important for the development and quality of space at FSI, whether it was the reconstruction of Building H on the campus or the construction and equipping of a number of laboratories at the Faculty Za Válcovnou and, above all, the preparation of the project and construction of the new CEMMTECH faculty building. 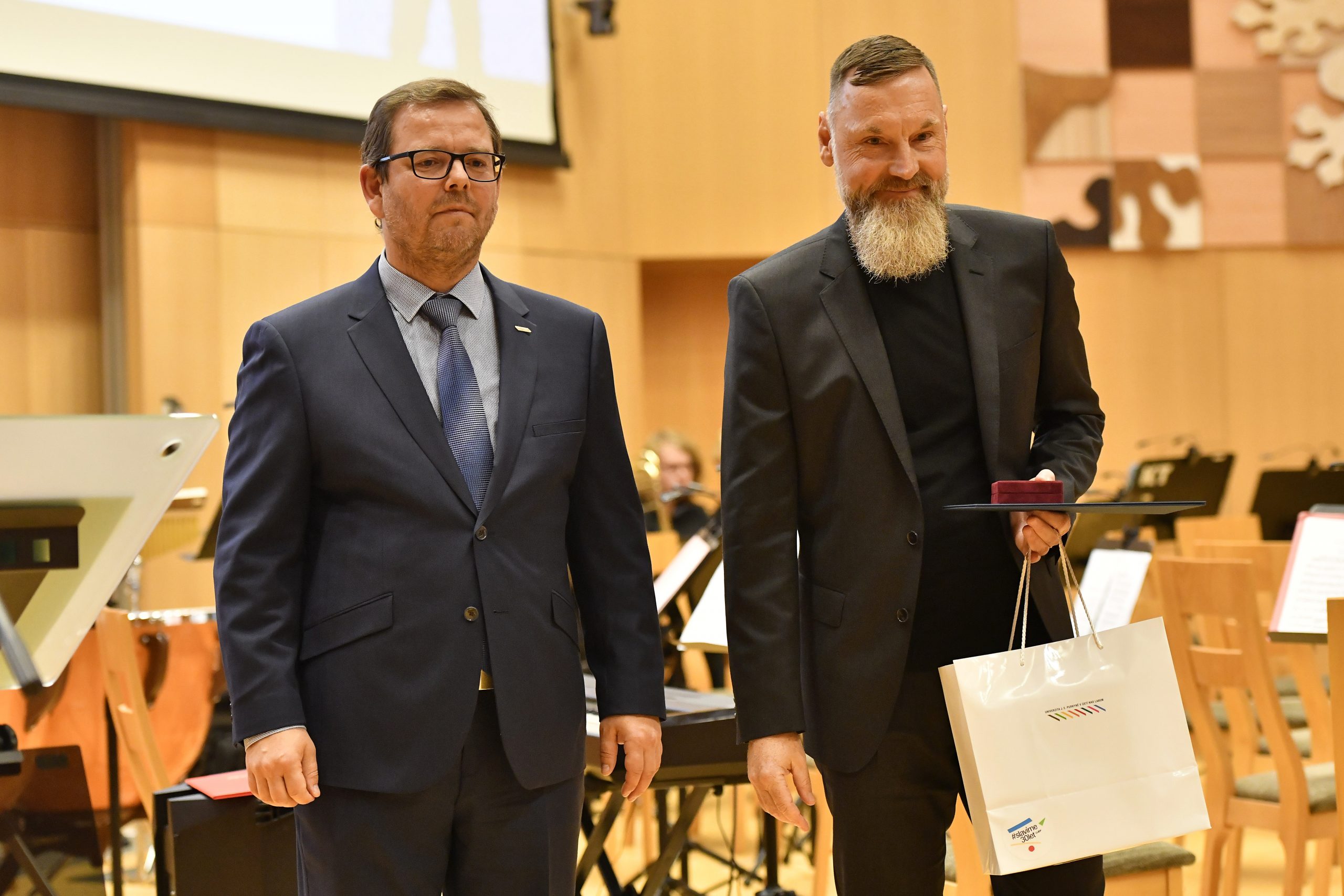 Prof. Michal Koleček has long been associated with the Faculty of Art and Design and served as Dean for two terms. He is responsible for the accreditation of the Master’s degree in Curatorial Studies, the PhD degree, as well as the habilitation procedure and the procedure for appointment as a professor in the Visual Communication programme. At FUD he also founded the then unique Department of Electronic Image with an orientation towards new media and initiated the creation of the incubator Armaturka in Předlice and subsequently the House of Art Ústí nad Labem.

However, his activities for the establishment of the university, especially as a member of the first independent Academic Senate of the Faculty of Education, to which he was co-opted as a student in 1990, as one of the three key leaders of the Ústían student movement in 1989, have a fundamental role for the UJEP and the development of the region. Together with Radek Kotlaba and Jan Šícha, he was one of the strategic negotiators and coordinators of the steps leading to the transformation of the then independent Faculties of Education into regional universities. 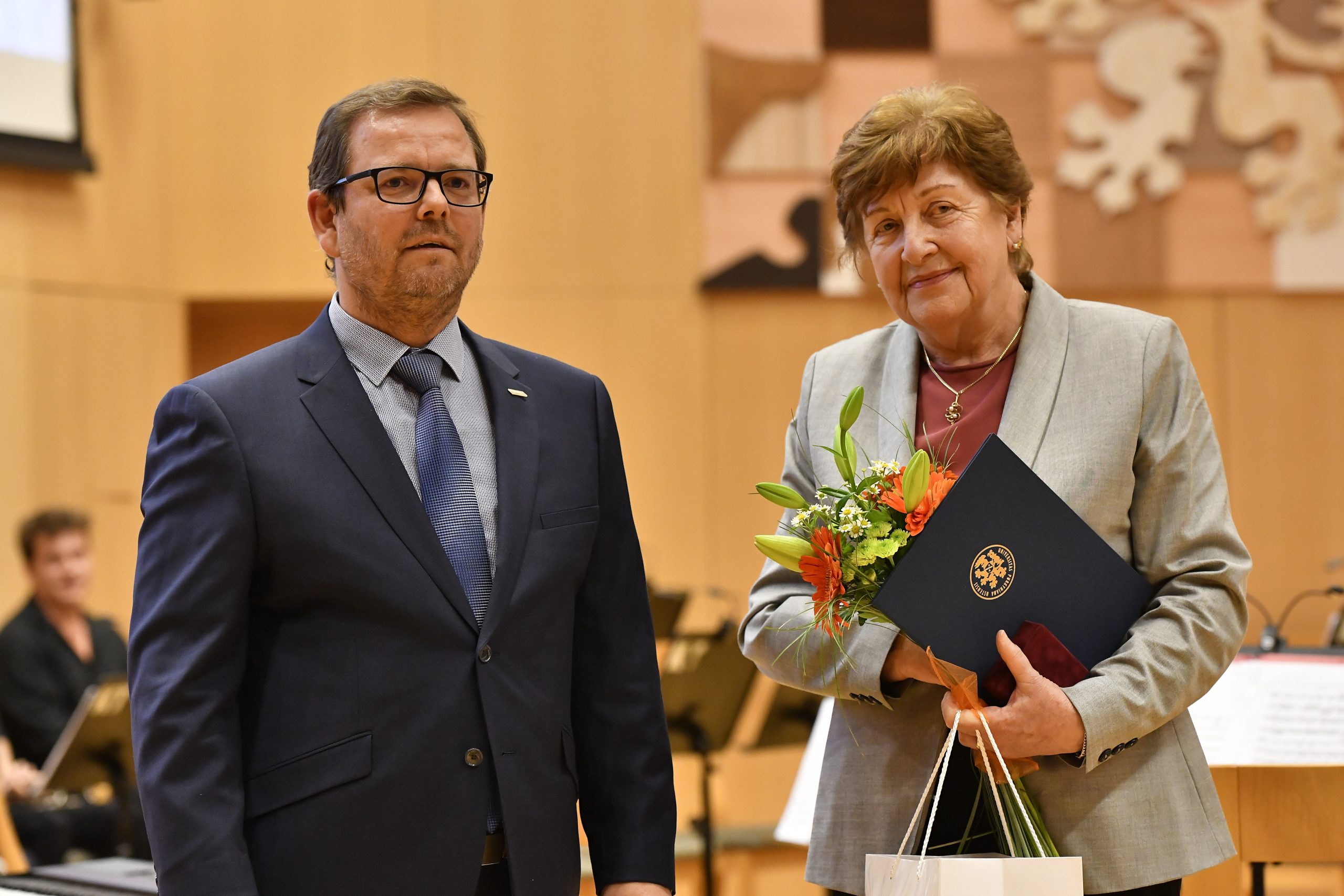 Prof. Magdaréta Šulcová has been associated with the Faculty of Health Studies of the UJEP, specifically the Department of Nursing, since 2007, when the Institute of Health Studies of the UJEP existed. For many years she was the guarantor of the courses that formed the profile of the graduate of the study field of General Nursing, then the study program General Nursing. As a guarantor of the follow-up Master’s degree programme Organisation and Development of Healthcare Facilities, she was behind its successful accreditation in 2019. In 2018-2020, Magdaréta Šulcová was a member of the expert panel of the Health Sciences Council for Research, Development, Innovation of the Government of the Czech Republic for the evaluation of research organisations according to the Methodology 17+. 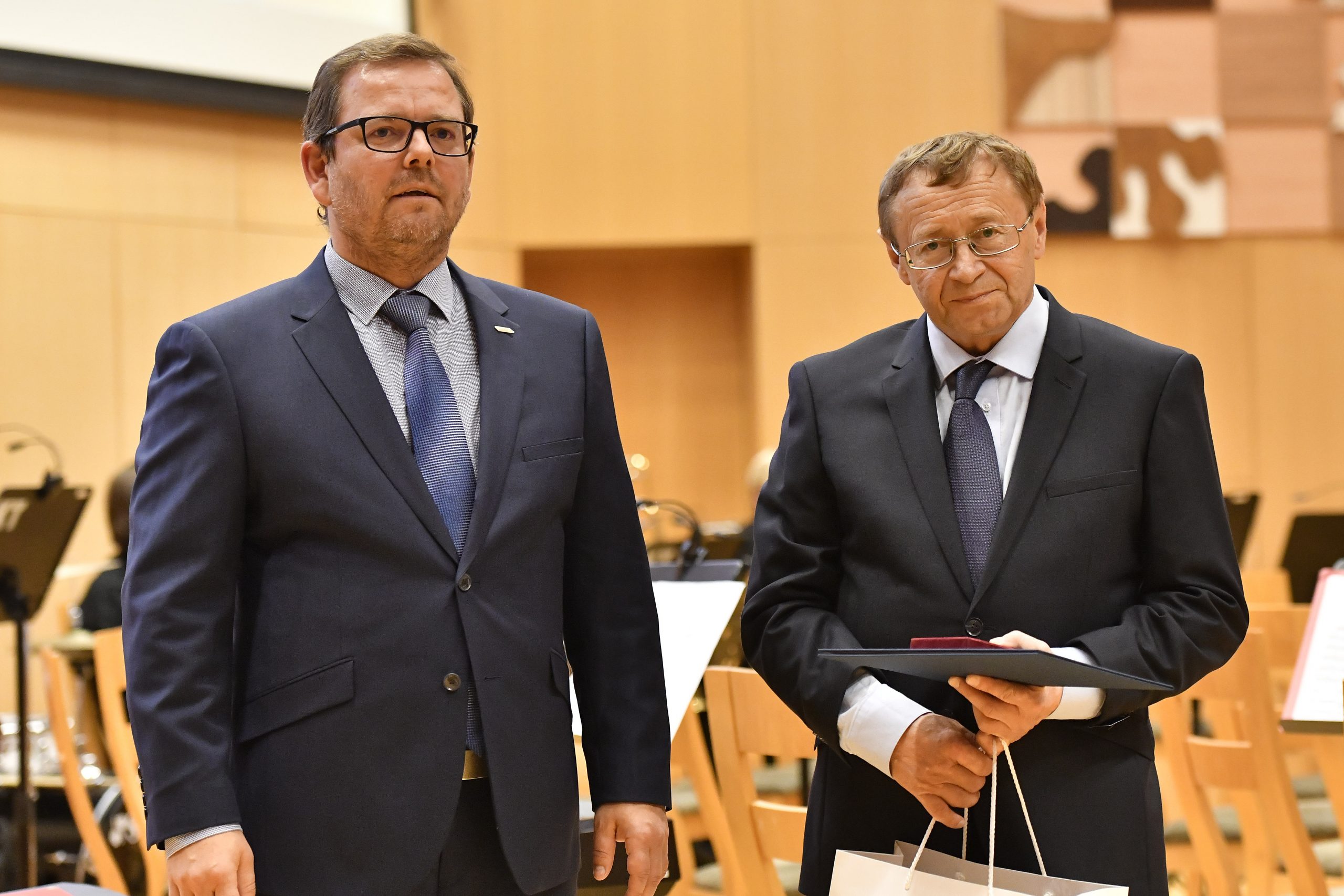 Prof. Pavel Janoš is a long-standing employee of the Faculty of Environment and one of the most successful scientific and pedagogical employees of the UJEP. During his time at the University of Ústí nad Labem, he has educated a long line of excellent graduates, some of whom have found employment directly at our university, others at other Czech universities or at institutes of the Academy of Sciences, and all of whom are very successful in their fields. Prof. Janos is very popular as a teacher and his teaching is generally highly rated.

In terms of scientific publications and the quantity and quality of his research projects, Prof. Pavel Janoš is one of the leaders in his field in the Czech Republic. Not only does he tirelessly raise the level of our university by successfully solving them, but he also brings with them much needed funding, which helps the faculty and the university to develop the chosen research topics, but also provides top laboratory equipment. The award of the Commemorative Medal symbolizes his lifelong diligence and commitment to carry out his work with purpose, conscientiousness and tirelessness.

Prof. Michaela Hrubá has been associated with UJEP all her professional and professional life, especially with the Faculty of Philosophy. As a recent graduate of the then Faculty of Education, she worked at the Department of History from 1991, headed the department from 2002 to 2015, and in 2005 made a significant contribution to the establishment of the Institute of Humanities during the transformation of the Faculty of Education. The Institute, which she headed since its foundation, became a faculty a year later and Michaela Hrubá was elected the first dean by the academic senate of the new faculty. Since the establishment of the Faculty of Education, Prof. Hrubá has been repeatedly in the position of dean, but also vice-dean for development and informatization, behind its development, both in the field of education and space. Of fundamental importance in this direction is the demanding reconstruction of the so-called Pavilions F of the former Masaryk Hospital into the current seat of the Faculty and the institutional accreditation for the field of Historical Sciences to the doctoral degree. 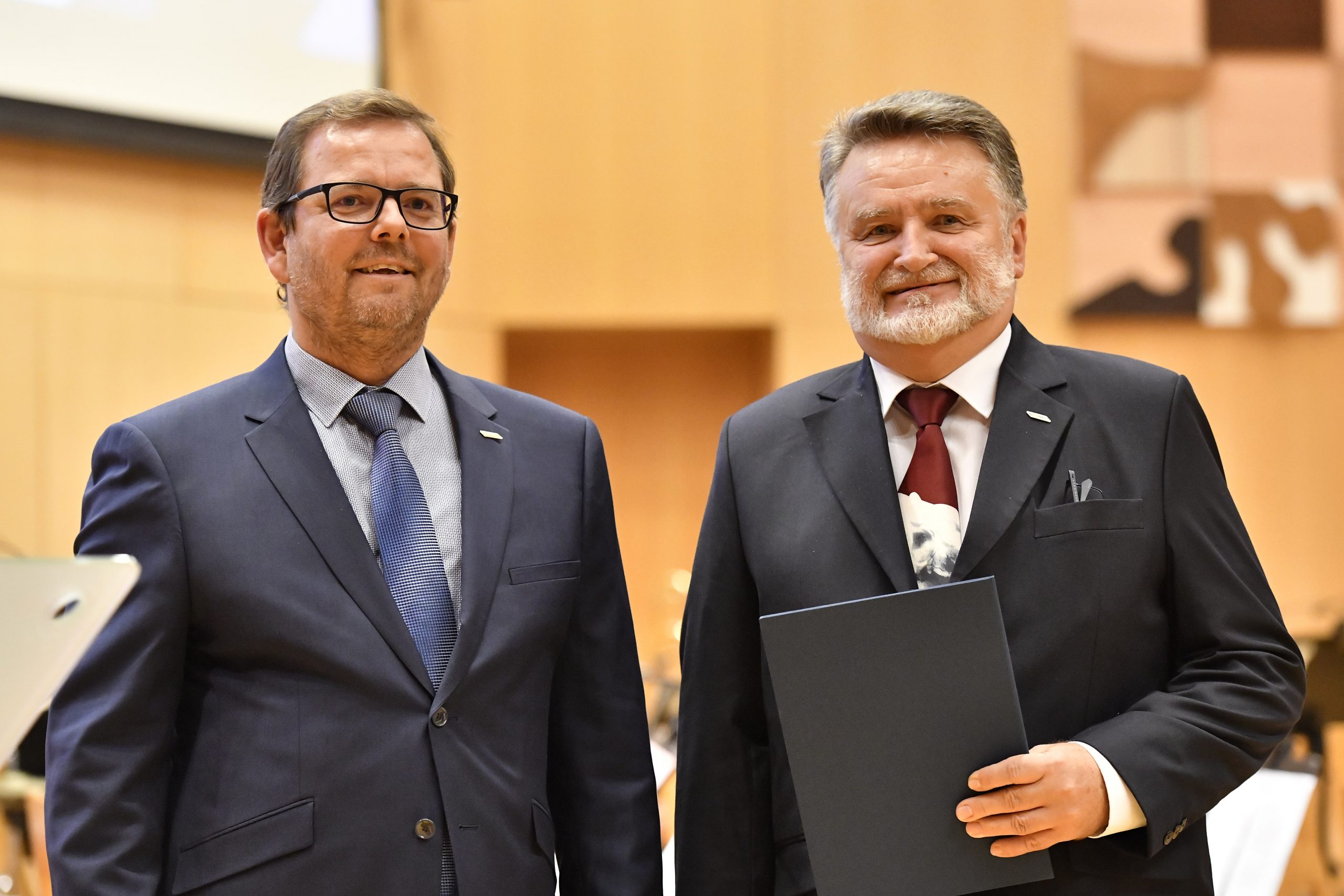 Doc. Zdeněk Radvanovský started his professional career in the higher education in 1980, when he joined the then Faculty of Education as a teacher. From 2004 to 2011, he headed this faculty and then from 2011 to 2018 he participated in the management of the university as Vice-Rector for External Relations. 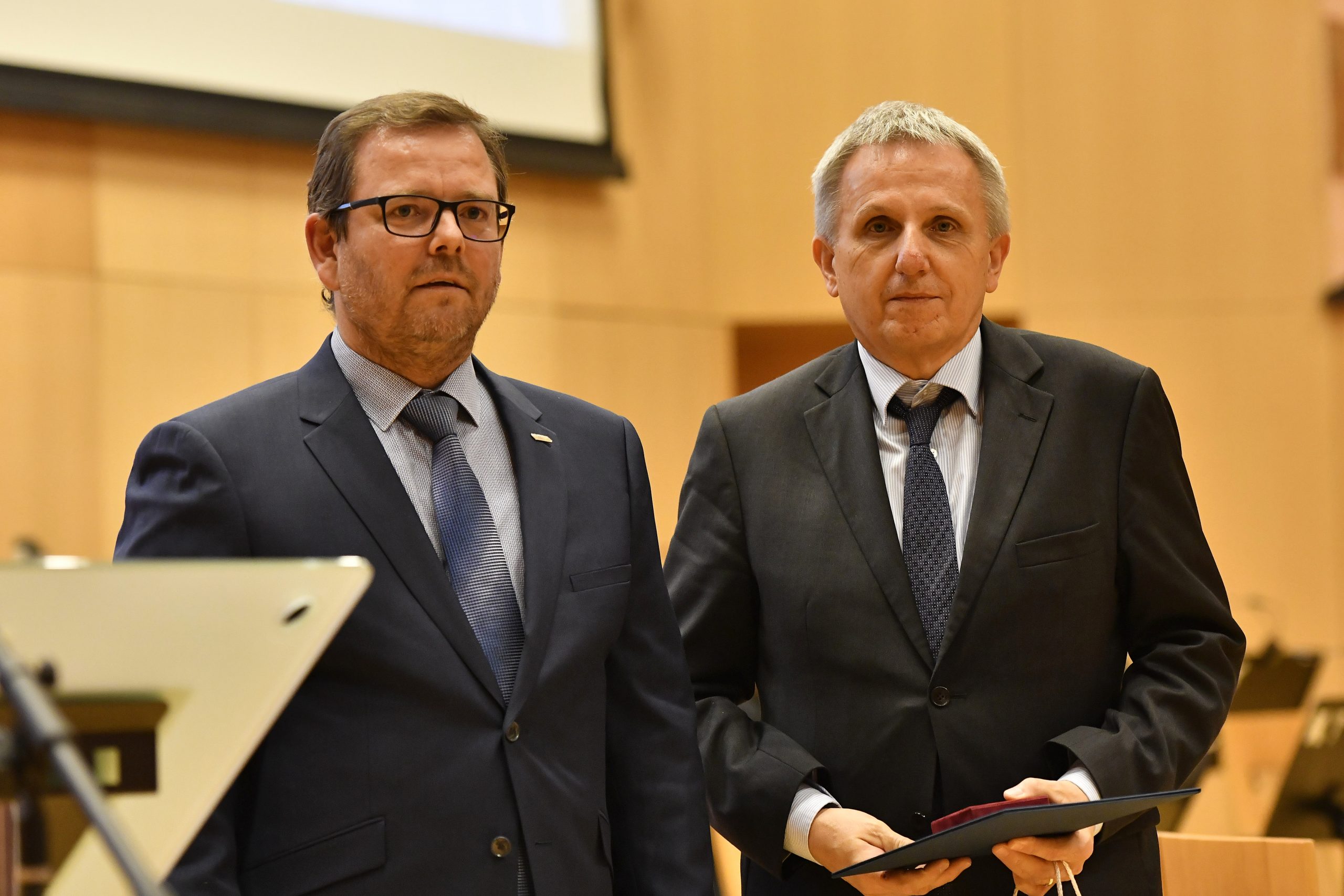 In the position of Dean, doc. Pavlík managed to stabilize the young Faculty of Science and lay the foundations for its further development. His name will also forever be associated with the architectural competition, the preparation and the start of the construction of the Centre for Natural Sciences and Engineering at the UJEP. Thanks to his dedication, enthusiasm and willingness to listen, he managed to create a team of quality academic and research staff at the faculty, who bring scientific prestige and professional reputation to the Ústí region.

Jiří Preclík, Museum of the City of Ústí nad Labem

Author of photo: Jiří Preclík, Museum of the City of Ústí nad Labem

30 years of UJEP: Cut of the ceremony of awarding commemorative medals

30 years of UJEP: Concert of the Teplice Conservatory